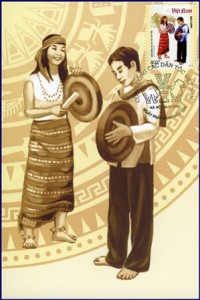 Customs and habits
The Cho Ro lives in houses built on stilts and on the ground. Both patriarchal and matriarchal customs have significance in the family life of the Cho Ro. The Cho Ro believes that all things have souls and spirits. These spirits have an invisible control over humans which forces them to become involved in worshipping rituals and puts special taboos on them. The most important worshipping ritual is the one that pays respect to the souls of the forest and the rice plant.

Culture
Cho Ro language belongs to the Mon-Khmer Group and has close ties to the Ma and the Xtieng languages. Their musical instruments are comprised of a set of seven-pattern gongs, string instruments with a bamboo sound-box, and alternating songs.

Costumes
The Cho Ro has adopted the Kinh style of dress. The women wear necklaces and bracelets made of copper, silver, or beads.