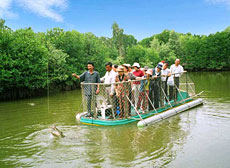 The Vam Sat Mangrove Forest is a part of the Can Gio mangrove ecosystem covering an area of 1,862ha about 55km to the southeast of HCMC. It’s a popular destination for many young people who visit to discover the rich and diversified flora and fauna, including such rare animal species as the spot-billed pelican and the smooth-coated otter.

Vam Sat is also home to the rare black-spotted yellow crocodile with red eyes which is only found in the waters of southern Vietnam and one of the world’s fiercest crocodile species. They used to threaten locals in the Can Gio Forest but there are no wild carnivores lurking in the rivers today. Instead, tourists who want to see them visit crocodile farms to witness and learn about the species.

Student of Hanoi Univeristy Hoang Thai Minh said that he and his friends decided to visit even though many of the girls were scared. “It quite a thrill for tourists,” said Minh, who described standing on boats specially designed boats not to overturn and covered with a strong net to repel croc attacks. “You get to hold a strong pole with a dead fish on the hook and prepare for big bites from those big-eaters. What’s a great feeling! It was definitely one of the wonderful experiences in my life.”

“The issue here is not how to fish for the crocs but how to keep calm and hold the rod tight when the crocodile takes the bait,” added Minh Tung, a worker from Binh Duong Province. “Overcoming the fear is great. The crocodiles look awful and fierce. I am the bravest of our friends so I wasn’t frightened when one snatched my bait.”

For the less adventuresome, the farm also features crab fishing or fish catching after bailing the pond, said Tran Van Phuong, Deputy Director of the site.

A short journey by sampan will also lead visitors to a lagoon which is home to hundreds of the large bats known as flying fox. There area was approved by the HCMC administration in 2003 as sightseeing and research site for domestic and foreign nature-lovers.

During the day, the large fruit bats hang high in the trees sleeping. The nocturnal animal, found from Australia to Malaysia, Cambodia and Laos, goes seeking food at night. The number of bats has fallen remarkably. In 1999, they were counted at about 3,000, but the number has fallen to about 300 because of hunting and predators.

The Vam Sat site also has 100ha aviary. In summer, most of the birds in the area nest and care for their young. Those who wish to explore it have to wear boots and trek through the mud to the date forest. At sunset, birds are seen in different colours, adding some romance to the afternoon.

“We are planing a major project which will allow tourists to watch the birds more closely, building nests and taking care of their young,” Phuong said. The management board was also reviewing ways to attract more birds to the area, he said.

The Vam Sat zone was recognised one of the world’s 65 sustainable development tourist sites, and one of only two in Vietnam, by the World Tourism Organisation in 2002. In 2003, the organisation proclaimed Vam Sat an important wildlife sanctuary characterised by a wetlands biosystem dominated by mangrove and many rare species.

After visiting the aviary, Minh and his friends made their way towards Tang Bong Tower to enjoy the panorama of the whole area from atop the 26m-tall structure. The site is also planning the development of a small museum to display terracotta artefacs from the Oc Eo culture (first-sixth century).

Here, Minh also had a chance to discover war relics from the famous waterway battlefield and learn about the hardships endured by the Vietnamese liberation force during the American War at the resistance base of Sac Forest.

One day in the forest hardly seems enough to experience and learn everything about it. Minh and his group vowed to return in the middle of the eighth lunar month for the spectacular festival of the region held here annually. The Nghinh Ong Festival prays for safety offshore and wishes for peace, happiness and prosperity for the local fishing community.