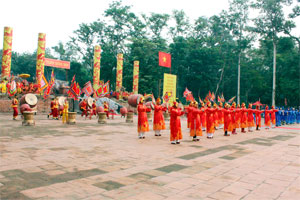 al will be held in Thanh Hoa province from September 25- 26th, as part of activities to mark the 595th anniversary of the Lam Son Uprising and the 580th death anniversary of King Le Loi, the first king of the Le dynasty.

The event includes incense offering ceremonies at Le Thai To Temple in Xuan Lam commune; the Le Thai To Tomb and the Lam Kinh Temples in Tho Xuan district; the Le Lai Temple in Kien Tho commune, Ngoc Lac district; and the Le Loi monument in Thanh Hoa city.

Besides, various cultural and art performances, camping, sports activities as well as exhibitions to introduce Le Dynasty’s architectures will be also organised during the festival.

On the occasion, the province will also hold a ceremony to receive the certificate, recognising Lam Kinh historical relic as a Special National Relic.

Lam Kinh historical relic, about 50 km west of the Thanh Hoa City, has been known as the sacred homeland of the national hero Le Loi, the leader of the resounding Lam Son Uprising in the 15th century against the Chinese Ming invaders to bring about independence for the Viet people. Le Loi later ascended the throne as King Le Thai To.

Constructed in 1433, right after the death of King Le Thai To, with numerous monuments and mausoleums, Lam Kinh has been considered the second capital of the Le Dynasty, beside Thang Long Citadel.