The backpacker grapevine, online and word of mouth, lands Vietnam travelers in areas where Westerners congregate such as HCM City’s Pham Ngu Lao area in District 1. One Westerner I spoke to there said he had heard about it by posting a query on the lonelyplanet.com website about where to find the backpacker social life when he arrived in HCM City.

Tourists booking tours at the backpacker area in HCM City’s Dist.1
In the few years since those first cheap hotels opened, hundreds more guesthouses and cheap hotels have started thriving businesses in the few blocks that the area occupies. Many of the properties that do not have rooms for rent operate as restaurants, bars, tour operators or shops selling souvenirs, cheap clothing and knock-off CDs – basically anything a backpacker might buy. “Open tour” buses, which allow travelers to hop on and off buses several times with a single ticket, start from here and arrive there, heading for all the country’s top destinations – Nha Trang, Hoi An, Hue or Hanoi. Normally these deposit passengers at a commission-paying guesthouse, and budget travelers could face a battle to head elsewhere.

However, the area’s success has caused property prices to rocket, and many guesthouses are now giving themselves a facelift, re-branding themselves as boutique hotels and charging US$50-70 a night, much higher than three to five years ago. But, in general, for the moment at least, there is enough curiosity about Saigon’s backpacker ghetto that it draws curious Vietnamese and Westerners to hang out in its quirky bars and cafes.

Just like the HCM City’s backpacker area, Ta Hien Street in downtown Hanoi is a popular destination of foreign tourists to trade travel stories and drink some of the world’s cheapest beer. On the website of The Lonely Planet, Ta Hien is dubbed as “The first street that backpackers visit when they arrive in Hanoi and the last place they see before they leave.”

The 200-meter-long strip of broken pavement and sullen houses in the heart of the old quarter plays home to hundreds of travel agencies, budget hotels, cheap eats, hawkers and any business that is likely to ply a few dollars from the price-conscientious backpacker. 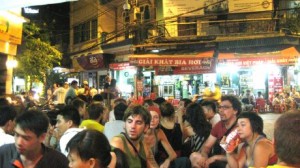 But the real meet and greet spot of the city is draught beer corner, an intersection that serves up cool pints of odd tasting beer for as little as VND3,000 (16 U.S. cents) a glass. At the intersection of Ta Hien and Luong Ngoc Quyen streets, the four draught beer shops are teaming with groups of backpackers who have settled into Hanoian street life. But when sunset falls, the “international crossroad” starts to come alive. It all starts at about 8 p.m. and goes until midnight. People gather, drink beer, chat and sing.

Besides Saigon and Hanoi, other cities across Vietnam that are making tourism a specialty are watching backpacker areas that spawned a few years ago grow and develop organically.

It is said that visitors cannot claim to have been to Can Tho City in the Mekong Delta region if they have never been to the city’s Ninh Kieu Pier.

The capital of the Mekong Delta and a few hours by bus from Saigon, Can Tho attracts backpackers who want to discover the mystique of the Mekong. Ninh Kieu Pier cannot compare with the backpacker area in HCM City for the dynamism and variety of tourist services. However, its natural scenery far outshines that of city’s area. One of the interesting things is that the pier for the boats is in the middle of the park. The boats take passengers across the river. They also take visitors to orchards on islands a few kilometers from the city, to the tourist attraction of Huong Phu Sa on another island, or to the floating markets of Cai Rang and Phong Dien.

At one end of the park, Can Tho Market bears the signs of increased tourism. The 200-year-old market has been restored to keep the original character. The central part of the market has become a large area where souvenirs are sold. When night falls, the restaurants here are full of foreign visitors. Especially, from 8 p.m. to 10 p.m., the floating restaurant keeps moving slowly along the Can Tho River, so tourists on the restaurant can enjoy looking at the scenery of the mighty river in the dark.

Traveling toward to the central region, when staying in the central coastal city of Nha Trang, budget travelers would do well to visit the “headquarters” of foreigners on Biet Thu Street. With many shops owned by foreigners, visitors there may feel as if they are walking down a street in a modern European city.

While the rest of the city sleeps, the party rages all night in the haven. Most of the mini-hotels, shops, restaurants and bars are crowded with large numbers of visitors from Europe, America and other places.

Over the length of its 500 meters, there are over 20 restaurants and bars serving food from Germany, Italy, France, Japan, Korea and others. Shoppers will find a treasure trove of souvenir shops selling locally produced goods and there are plenty of travel agents offering tours and travel services.

Meanwhile, the whole ancient town of Hoi An in Quang Nam Province that is some 500km north of Nha Trang City is seen as the area for backpackers as it is so small that tourists just need to walk about two hours to discover it. The sightseeing places gather in some central streets, especially on Tran Phu Street.

Tourists can see many houses built based on Chinese architecture. The night in Hoi An is very beautiful, especially the riverside road, where many restaurants have romantic decorations. On the 14th day of the lunar month, people will switch the electricity off and hang decorative multi-colored lanterns.

Traveling some 150km toward the north to visit Hue City, the former capital of Vietnam and now a tourism destination, backpackers can go to the area including Nguyen Tri Phuong and Le Loi streets to feel the social backpacker atmosphere. From the “backpacker/budget traveler” alley with a few hotels and cafes whose prices are listed for foreigners, tourists can easily go to the river, Imperial Palace and Dong Ba Market. Scooters-for-hire are available.