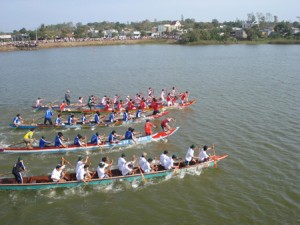 The Vietnam Sea Village Festival opened on August 1 in the central coastal province of Ninh Thuan with participation of troupes from the south-central coastal provinces.
The opening ceremony will be organised tonight and broadcast live on the Vietnam Television. It will be highlighted by an art performance by actors from the Vietnam Opera and Ballet Theatre and art troupes of the province.

Dubbed Ninh Thuan – A Destination for Vietnamese Sea Culture, the festival includes a wide range of activities such as a traditional cuisine show to introduce local folk foods, a photo exhibition honouring daily life and the socio-economic development of fishermen, as well as an art performance and sporting event to highlight traditional cultural characteristics of villages along the coast of Vietnam.

“This is also an opportunity to respect folk games and traditional festivals of the local people,” he said.

Each province participating in the festival will introduce one particular folk ritual from its sea villages.

The festival is organised by the provincial People’s Committee and will run until Friday.
With a long seaside and high mountains near the coast, Ninh Thuan is famous for destinations such as Vinh Hy Bay, Ninh Chu and Ca Na beaches and Nam Cuong Sand Dune.