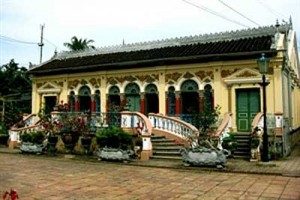 cient house in the Mekong Delta city of Can Tho is an ideal place to explore the region’s history.

Located at 26/1A Bui Huu Nghia Street in Binh Thuy ward, about five kilometres from downtown Can Tho, the house is filled with features that represent rural areas in the Mekong Delta region during the 20th century.

The French-style house was built in 1870 by the Duong family on an area of nearly 6,000 sq m. Its base is about one metre higher than the land surface.

In order to keep warm and avoid termites, the house owner sprayed a 10 cm layer of salt under the floorboards.

With front and back gardens, the five-room house offers a comfortable environment full of fresh air and brilliant sunshine.

The house is now preserved by Duong Minh Hien, the sixth generation of the Duong family.

Hien said the house has an orchid garden with various types of flowers, which his father, Duong Van Ngon, spent a lot of time and effort on.

According to Le Hung Dung, Chairman of the municipal People’s Committee, there are very few ancient houses in the Mekong Delta region and Can Tho city in particular.

He underlined the need for the city to devise strategic measures in order to preserve and promote the house’s traditional values, thus serving tourism development.

Binh Thuy ancient house has been captured in many films such as “The silt ways,” “The Bac Lieu mandarin’s son” and “The lover” of French director J. Annaud.
(Source: VNA)